Ranchers are the original conservationists.

They’d call themselves managers, stewards, or just-plain-ranchers, but there’s no mistaking the careful management and successful outcomes of their labors. They are conservationists in the truest sense – working with the landscape and tailoring their approach accordingly.

It’s this commitment to place-based management that has prompted ranchers to engage with the Biden Administration’s proposal to conserve 30 percent of the nation’s lands and waters by the year 2030. Recently rebranded as the administration’s campaign to “Conserve and Restore America the Beautiful”, the conservation campaign has inspired equal measures of enthusiasm and resistance – and for good reason. Historically, ranchers in the West have been skeptical of federal government programs that tend to be top-down “solutions”, rather than the locally-led, locally-supported work that ranchers have been doing for generations.

While this skepticism runs deep, the 30 by 30 campaign offers a rare opportunity for ranchers to be widely recognized as the conservationists they are. From the valleys of California to the sagebrush seas of Wyoming and everywhere across America the Beautiful, ranchers and farmers carry forward generations of hard-fought knowledge, dedication, and persistence to conservation goals. Their sheer stubbornness to continue ranching through challenges like drought and fire means that they have kept these lands open, unmarred by concrete or development through each of these trying times. They have also kept these lands healthy, even in the wake of drought, fire, and plague, by actively cultivating landscape recovery. Because of their presence on the landscape, the beautiful American legacy of wide open spaces as far as the eye can see has been preserved.

This term – preservation – causes a good deal of consternation among this community. Particularly in the West, the fight for the future of these vast landscapes has hinged on the distinction between preservation and conservation. Preservation evokes memories of taxidermy and shadowboxes that both seek to freeze a moment in time. While many of us would like to stop time, that’s just not how natural resource management works.

In the West, “preservation” has historically been used interchangeably with designation, acquisition, and prohibition. Land management guided by preservation inspired designation of multi-million-acre national monuments that far exceeded the intent of the Antiquities Act and creation of wilderness areas that now regularly experience catastrophic wildfire. This approach is widely reviled by ranchers who know that responsible natural resource management means being nimble enough to respond to rapidly changing conditions, not expecting the resources to stay the same despite all other factors.

This nimbleness meant ranchers were ready to respond to President Biden when he first announced his “30 by 30” goal. During the 90-day period when the Departments of Agriculture and Interior were gathering public input about how to meet this 30 by 30 goal, the Public Lands Council (PLC) shared a few key recommendations from public lands ranchers.

We told the administration they must differentiate between preservation and conservation. If this 30 by 30 was going to be an effort to preserve 30 percent of the country’s lands, ranchers would oppose for the sake of the resource. Ranchers and resource managers also know that acquisition, designation, and prohibition do not equal conservation. We urged the administration to take a wide view of conservation activities, knowing that no single practice can be successful in every scenario. Conservation, much like the ranchers who do it on a daily basis, has to be nimble.

We told them that they needed to be clear about how the conservation would happen – what activities would count, where the conservation would happen, and what lands would be eligible – if they were to avoid widespread panic and opposition. The public needed reassurance that the administration didn’t intend this proposal to be a thin disguise for a grab of private and public land rights. This concern, of course, is well-founded in communities that time after time have had their entire realities upended by executive fiat. Furthermore, the administration needed to be clear about whether this effort would happen in the West on existing public lands, in the East on private lands, or a mix of something in between. Even in the early days of their exploratory process, Department officials were peppered with questions that they just couldn’t seem to answer.

Perhaps most importantly, we told the Department that they must recognize the good work already being done. If they truly wanted to achieve their conservation goals, and wanted to do so on a large scale, they needed ranchers’ support, engagement, and expertise.

It’s important to remember how this process started. President Biden announced the 30 by 30 conservation goal as part of an Executive Order, which is effectively a presidential wishlist. It’s an instruction to the Departments to do something, often with few instructions on how to accomplish the task. That Executive Order left the 30 by 30 process open to the Departments and instructed them to come up with a plan in 90 days, but offered little additional guidance. In that first three months, the Departments appeared to have no clear direction other than to listen to the public. PLC took the opportunity to share ranchers’ message because if we don’t tell them, who will?

Shortly after that 90-day period ended, the Departments of Agriculture, Interior, and Commerce issued their report that renamed and reframed 30 by 30 into the first national conservation campaign to “Conserve and Restore America the Beautiful”. The long-awaited report was light on details. It didn’t answer how or where the conservation would happen, or who would do it. It didn’t respond to those who questioned whether this would be a public land push, a private land effort, or somewhere in between. The report contained little about whether the Departments would seek new authorities from Congress.

So, what did the report say?

In a huge victory for farmers and ranchers, the report recognized the need to “incentivize and reward the voluntary conservation efforts of fishers, ranchers, farmers, and forest owners” as one of the six core areas of focus for the campaign. The importance of this inclusion cannot be understated: this language is a first step toward the administration formally recognizing the wide array of benefits provided by livestock production in a public, visible, and enthusiastic way. PLC keeps preaching the message that “grazing is good”, and the administration listened.

The report contained a few seriously concerning points, too. A few key mentions of preservation and wildlife corridors, the focus on significantly expanded access to lands (for recreation, primarily), and the ongoing uncertainty about some of the key definitions was sufficient to keep many folks on the edge of their seats. Ranchers and other stakeholders are right to still be skeptical when so many details remain unanswered.

This skepticism, however, shouldn’t prevent engagement in what comes next. With so many questions left to answer, the administration is putting together a group of government agencies, scientists, tribes, and other stakeholders to create a Conservation and Stewardship Atlas. The atlas will be the guide for what counts, where conservation will happen, who will do it, and who will count it. Being an active stakeholder now is imperative to ensure the government hears from the true American conservationists who do conservation, not just those who write about it.

At first glance, the America the Beautiful campaign seems overwhelming, pulling us in hundreds of directions at once. When you dig in a bit, it becomes clear that it’s just a new name for all the same issues we’ve been dealing with for years. PLC has been working on landscape resiliency to catastrophic wildfire, invasive species, balancing multiple use, and protecting private property rights for decades – and will continue to do so regardless of this 30 by 30 goal. The quiet genius of this campaign is that it gives the federal government a neat box with a bow on top where they can put all of their natural resource management issues together in once space.

If you’ve read this far, you may think I chose a really bad time to don my rose-colored glasses, but I believe the world looks better in full color. When President Biden was sworn in, western states knew we’d be facing fights over new monuments, expanded wilderness, and policies supported by groups who would like nothing more than to remove all livestock from public lands. This was going to be true regardless of whether these things were included in the first “national conservation goal”. These fights will come, and we will fight them with the same vigor we have always had. As a nimble, flexible ranching community, we can both fight those fights while also actively shaping a proposal that should reflect the good work we already do. Those conversations are two sides of the same coin, and both are necessary to ensure the longevity of a strong public lands ranching industry.

A wise person once told me that if you’re not at the table, you’re on the menu – and we sure don’t want to be on the menu for a proposal that affects 720 million acres – an area the size of Texas, Oklahoma, Kansas, Nebraska, North Dakota, South Dakota, Montana, Wyoming, Colorado, and New Mexico, with Vermont thrown in for good measure.

As conservationists, ranchers face the good, the dry, and the ugly every year, and are the best equipped to guide this ambitious proposal to ensure this country does conservation – the ranchers’ way.

Kaitlynn Glover serves as Executive Director of the Public Lands Council and as Executive Director of Natural Resources for the National Cattlemen’s Beef Association. She joined the office in January 2020 after spending five years as a policy advisor on agriculture, natural resources, and Tribal policy issues for a Western United States Senator. Originally from Wyoming, Kaitlynn has a diverse background in agriculture policy and production, and strong ties to grazers, recreationalists, and many other users of public land resources. 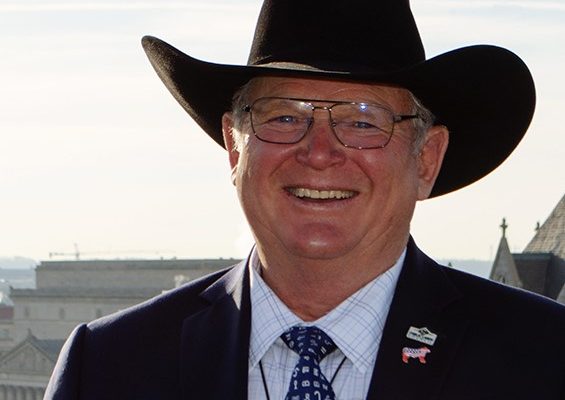 Mark Roeber: Grazing as a solution in the climate conversation

Niels Hansen: The Seasons Change, The Mission Does Not